Menu
Shopping cart
This is the Header Notice module, use it for promotional or other important messages. 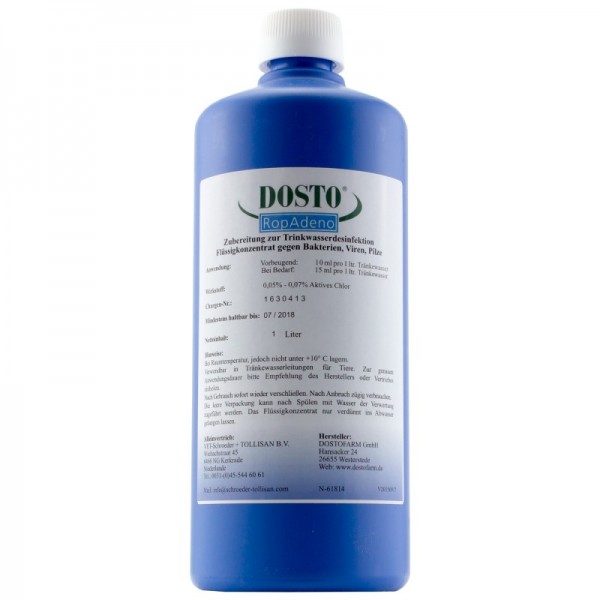 Tollisan Dosto RopAdeno, a revolutionary product in the section of disinfection of drinking water for your birds

It guarantees a total disinfection of the water, eliminating bacteria, fungi, viruses and other pathogens

Why is hygiene so important with drinking water for humans and animals (racing pigeons)? The digestive tract is by far the largest entry point for germs of all kinds. Drinking and uncontaminated water is the foundation for the health and well-being of humans and animals. Potentially deadly problems caused by contaminated drinking water, for example during natural disasters, occur over and over again.

Potentially fatal diseases, for example dysentery, cholera, and other infections, are often caused by contaminated drinking water in these situations. In reality, everyone is aware of the importance of hygienically safe drinking water.

More attention needs to be given to drinking water in the sport of pigeon racing.

What is RopAdeno ®? RopAdeno ® is a new electrolysis of treated water with special characteristics. Through the use of this special technology, through which the water is subsequently treated with an electric current, among other elements, hyperchloric acid is also formed, one of the strongest disinfectant agents and, at the same time, one of the most compatible for living organisms. It is only because of this excellent compatibility that RopAdeno ® can be added to drinking water.

However, RopAdeno® is many times more effective than hyperchloric acid alone and, with its nearly neutral pH value, it is also non-corrosive.

A part of the added electrical energy remains in the molecules and substances, which in a normal environment discharge themselves back into equilibrium.

This high-energy charge can, for the first time and through the RopAdeno ® product, be stored in a bottle for a long time and is also demonstrably measurable as a redox potential. The electrolysis water disinfection process is not new. Until now, however, after a short period of time, sometimes after only a few hours, the charge has limited itself over and neutralized with that it was no longer an effect against existing bacteria, viruses, fungi and spores.

What is new is that, with RopAdeno ®, for the first time, the success has been in producing a stable and effective product for the long term and therefore being able to offer a truly commercial product to the market. This new process is based on several patents.

Lorem Ipsum is simply dummy text of the printing and typesetting industry. Lorem Ipsum has been the industry's standard dummy text ever since the 1500s, when an unknown printer took a galley of type and scrambled it to make a type specimen book.